The photos on this page can be freely used for the purpose of publications in the press. A brief information on the medium in which these are published is requested. If a different resolution is required, please just ask briefly. 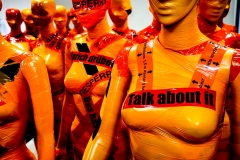 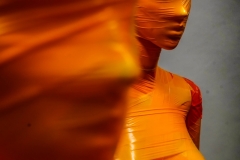 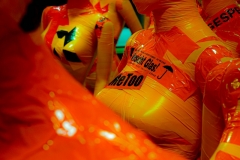 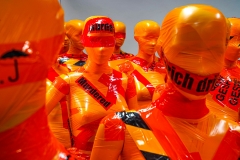 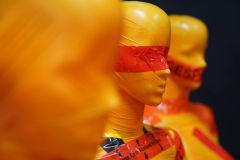 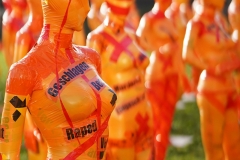 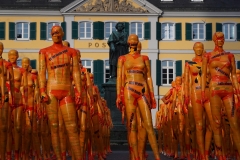 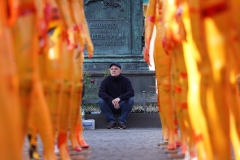 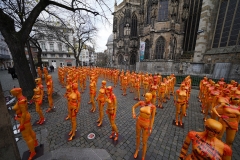 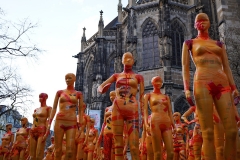 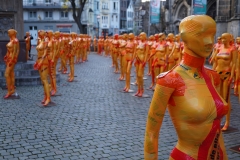 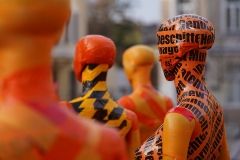 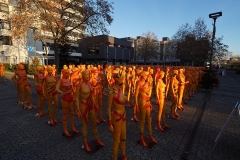 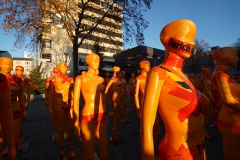 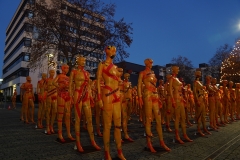 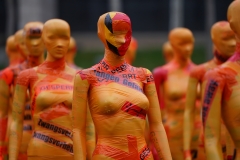 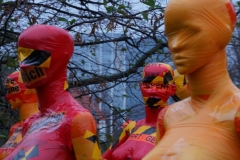 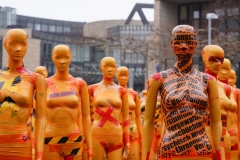 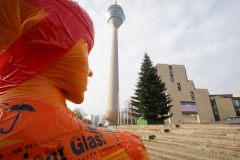 Violence against women and girls has been a topic since the very beginning of human history.

It has been written that each war’s winners would carry off the losers‘ wifes and girls, rape or kill them. There has always been some religion that would put women to a lower level than men or that would blame women for being the cause of all evil. Until today women suffer from not being treated unconditionally equally by their country‘s laws.

Women are witnesses to this huge gap of imbalance that divides our society until today. Women and artists.

Artists don’t want to kill, mutilate or rule. They want to create something good. Something that brings joy to the world, not harm. Something that carries a message just as the installation „Broken“ by Dennis Meseg.

This artist intends to speak out against violence against women. This original way of transforming his thoughts into art is way more profound than one would think at first sight.

Mannequins wrapped in orange warning tape: A combination of three symbols with a very well known and clear interpretation.

Warning tape represents a sign of boundaries not only in its purpose to protect people from danger but also in its use as a sign that marks a barrier.

Women are very often reduced to their looks as if they were just puppets on a string, easy to handle just like a toy. This way of looking at women is a sign of disregard. In addition to this many women are humiliated by having to hide or cover their faces from the world just as if they were some guarded piece of property that is being watched by its jealous owner.

Orange is the color of freedom, joy, safety and of emotional warmth. This is why the annual campaign by UN women „Orange the World“ has chosen this color for their fight against the constant, diverse misery that women all over the world have to face.

The warning tape that wraps the „women“ in Dennis Meseg’s installation covers these „women“, disguises them and isolates them from the outside world, but at the same time this warning tape wraps them in the color of freedom which is quite an interesting thought that moves the viewer.

The installation „Broken“ is to be seen as an appeal to finally stop violence against women! Men living in the 21st century are indeed able to see that their mothers and sisters, daughters and wives are of equal worth and so they are to be treated equally.

It should be their aim to make this world a better one, based on equality and respect for one another and for mother nature.

Just as every artist loves their work.